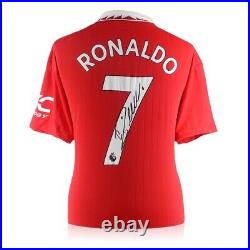 Official 2022-23 Manchester United home shirt, signed by Cristiano Ronaldo. / This football shirt was personally signed by Cristiano Ronaldo on October 11, 2022 in Manchester. Often considered one of the best players in the world, Cristiano Ronaldo has won five Ballon d’Ors and four European Golden Shoes. During his first spell at Manchester United, Cristiano won the FA Cup, the Champions League and the FIFA Club World Cup. After winning over 20 trophies at Real Madrid and Juventus, Ronaldo rejoined United in 2021. In 2022 Cristiano set the record for most goals scored in professional football (surpassing 807) and scored his 100th Premier League goal. Cristiano Ronaldo Signed Manchester United 2022-23 Football Shirt. This football shirt was personally signed by Cristiano Ronaldo on October 11, 2022 in Manchester. This product is supplied with a Certificate of Authenticity featuring a numbered hologram that matches an identical hologram affixed to your product. This ensures that the certificate can only be used to authenticate the item for which there is a corresponding number. If anyone attempts to remove either hologram it will destruct, so it is impossible to transfer the holograms to other items. Our company number and details are included on the certificate, with details of when and where the product was signed. Each certificate includes a photo of the sportspeople or celebrity signing one of the product line at the relevant signing session. For logistical reasons it is impossible to photograph every product being signed, but showing that the sportsperson or celebrity was present and signing items is, we believe, the best way to demonstrate the legitimacy of your products. Please note that the product image displayed here and reproduced on the certificate is a stock photo and not necessarily a picture of the item you will receive. Because all our products are hand signed, the signature and placement on the item you receive might vary slightly. At Exclusive Memorabilia we understand that authenticity is the number one consideration for any customer when shopping with us and that is why we unconditionally guarantee the authenticity of all our signatures. Details of Exclusive Memorabilia Ltd are registered with Companies House and our company number is 07596697. The owners and directors of Exclusive Memorabilia Ltd have been working in the signed sports memorabilia industry since 2002. During that time we have arranged dozens of signings with the likes of Pele, Maradona, Leo Messi and Cristiano Ronaldo. We specialise in football, boxing, rugby, tv and film memorabilia. This means that the majority of items we stock are from closed signing sessions that a director from Exclusive Memorabilia has attended, and witnessed the items being signed. The remainder are bought from a handful of trustworthy companies with whom we have been dealing for a number of years, and who we know to have the same standards as ourselves. Because we have worked with them and their agents for many years, they trust us, and often recommend us to each other personally. We never accost footballers outside training grounds or celebrities outside premieres as we don’t believe this is the correct way to do business. Furthermore, the quality of a signature from a signing session is usually much better than one grabbed outside a training ground through a car window. Watch footage from our signings. Add to favourite sellers. Signed West Ham United. Signed Horse Racing Memorabilia. Other Signed Sport Memorabilia. This item is in the category “Sports Memorabilia\Football Memorabilia\Autographs (Original)\Signed Shirts\Premiership Players/ Clubs”. The seller is “exclusivememorabilialtd” and is located in this country: GB. This item can be shipped worldwide.