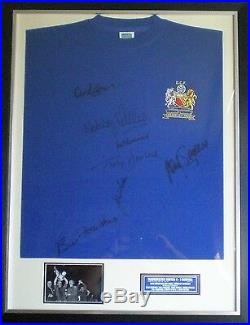 Manchester United 1968 European Cup Replica Shirt Display Framed. Frame size: 870 x 670 mm Personally Signed by: Tony Dunne, Pat Crerand, David Sadler, Bill Foulkes, Alex Stepney, John Aston and Nobby Stiles. Double Mounted: Cream & Black. Frame: Black with Silver Trim. This stunning display comes complete with a replica shirt signed by 7 of the 1968 European Cup winners including the result and goal scorers in which Manchester United beat Benfica 4-1 along with a photo. This Display comes expertly mounted and framed and comes with a certificate of authenticity. The run to the European Cup began easily enough, and the Reds cruised past the Maltese team Hibernians for a 4-0 win on aggregate. A tough, physical series against Sarajevo was next, followed by Gornik Zabrze from Poland. United won 2-1 on aggregate and then came the semi-final – two matches against the mighty Real Madrid. Real played a defensive game in the first leg at Old Trafford , stifling the offensive magic of the Reds. United managed a 1-0 victory, but it was a very small advantage to take into the Bernabéu. Denis Law was suffering from a knee injury, so Busby decided instead to call up the veteran defender Bill Foulkes. The game started badly for United as Real Madrid ran circles around them, leading 31 at half-time, 32 on aggregate. United came back strongly after the break and pounded the Real defence to no avail for half an hour until David Sadler levelled the aggregate score. Then Bill Foulkes played the hero as he buried a pass from George Best into the goal. It was the only goal he ever scored in European competition. United were through to the final and faced Benfica at Wembley. In many ways it was an emotional day, Matt Busby’s journey finally coming full circle after the tragically aborted promise of the Busby Babes. Bobby Charlton opened the scoring for United, then Jaime Graça equalised. Benfica piled on the pressure in the dying minutes and it took a brilliant save from Alex Stepney to deny Eusébio the winning goal. United managed to hold out until extra time, then George Best finally broke free of the stifiling marking of the Benfica defence and scored. Benfica were reeling and Brian Kidd , celebrating his 19th birthday, scored a header. Bobby Charlton finished off Benfica with a high shot for a 41 victory and United became the first English team to win the European Cup. Matt Busby would later be knighted for his accomplishments, as well as being awarded the Freedom of Manchester. Heroes Memorabilia are an AFTAL registered dealer #175, AFTAL are an organisation working in co-operation with the Police Force & The Trading Standards Authority to stamp out Fakes & Forgeries. Our aim is to bring you the best memorabilia available at all times. Dont hesitate and miss out on this once in a lifetime opportunity, you will see this valuable piece of memorabilia turn into an instant investment. All the autographs shown were either obtained in private signing sessions or through trusted dealers. The item “Manchester United 1968 European Cup Shirt Signed by 7 Framed AFTAL Nobby Stiles” is in sale since Monday, June 26, 2017. This item is in the category “Sports Memorabilia\Football Memorabilia\Autographs (Original)\Signed Shirts\Retired Players”. The seller is “heroesmemorabilia2007″ and is located in Nottingham. This item can be shipped to United Kingdom.