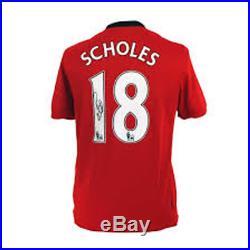 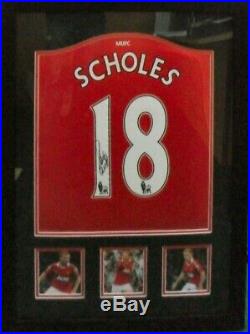 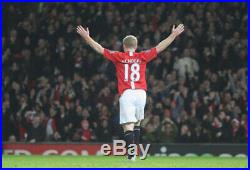 T online shop and also on the matchday stall. This piece of memorabilia is the iconic No. 18 shirt worn by Reds Legend Paul Scholes and features the signature of the man who surely wears the mantle of the greatest midfielder of his generation. Scholes is undoubtedly the best midfielder of his generation. Paul Scholes would have been one of my first choices for putting together a great team that goes to show how highly I have always rated him. He would have been one of the first players Id have bought, given the chance. Very few players can do that, but Scholes is one of them and I knew he was one of them. Thats why, without question, I think Paul Scholes is the best player in England. Hes got the best skills, the best brain. No one can match him. There isnt a player of his mould anywhere in the world. For years Paul Scholes has been one of the best players in the Premiership. He has always been under-rated throughout his career. Hes a team player, a one and two-touch footballer who makes good decisions on the pitch and makes his team play. He is a very complete, spectacular footballer. He always fights for the ball and tries to lose his marker to help his team-mates either to defend or to have a shot on goal. For any football player in the Premiership, Scholes is a player you want to emulate. I would happily end my career with the medals that Scholes has. Given away by Viera. Posession needlessly surrendered by Arsenal. Happy to get the ball down the other end of the pitch…. But can he do any more than. Is that the goal that’s. Won it for Manchester United? The 10 men have withstood the pressure, they’ve. Saved a penalty, and now Manchester United are withing moments of reaching the FA. Cup Final and that is as good a goal as you can wish to see. T is the official Manchester United Supporters Trust (Google us) – a non-profit fans organisation. Owned and run by our members – passionate Manchester United supporters. Recognised by MUFC, the FA, the PL and national fan organisations (FSF/Supporters Direct) and registered with the Financial Conduct Authority – with offices at 18 Sir Matt Busby Way just a stone’s throw from Old Trafford. All our items can be collected free of charge if preferred (see below). All shirts come with a Certificate of Authenticity. All our items can be collected FREE OF CHARGE from MUST HQ in office hours and for 3 hours before home games. We’re next door to the MUFC stadium at. 18 Sir Matt Busby Way, MANCHESTER M16 0QG. Office hours – please call. To ensure we are open before starting your journey but usual hours are. MONDAY- FRIDAY 10.30AM – 6.15PM. Except THURSDAY 10.30AM – 4.30PM. We have more items and special discount offers available from our website shop – search for “Manchester United Supporters Trust: MUST Online Shop” to find us. The item “Paul Scholes #18 Hand Signed Manchester United Shirt 2014/2015″ is in sale since Monday, October 21, 2019. This item is in the category “Sports Memorabilia\Football Memorabilia\Autographs (Original)\Signed Shirts\Premiership Players/ Clubs”. The seller is “manchesterunitedsupporterstrust_must” and is located in Manchester . This item can be shipped worldwide.