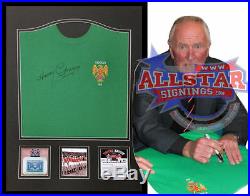 West Ham United. Republic of Ireland. View all other sports. A survivor of the Munich air crash in February 1958, Gregg was one of the disasters great heroes. Having escaped with just a bloody nose, he went back into the wreckage to pull out those who were trapped. He rescued a 20-month-old child, a pregnant woman and attempted to revive Matt Busby. It wasnt out of character. A real tough nut, Gregg was as vocal, commanding and abrasive as Peter Schmeichel would become three decades later. After thedisaster, Gregg was a part of the patchwork team built by Jimmy Murphy who reached the FA Cup final three months later. This is a retro 1958 FA Cup Final goalkeeper shirt, signed on the front, by United Legend Harry Gregg. The shirt bears the special phoenix badge commemorating Uniteds historic Cup run in the aftermath of the Munich Air Disaster. The shirt was personally signed by Harry in a signing session carried out and attended by Allstarsignings in Birmingham on 20th November, 2011. The item comes with an Allstarsignings certificate of authenticity which will have photographic proof inserted into it and. Has been professionally framed to an overall size approx. Please note: Signature position may vary. All framed orders are sent by Courier on a 24-48 hour service. All international orders for framed products are sent by fully tracked courier services. All of our items come accompanied by our Certificate of Authenticity to provide you with added peace of mind. The Allstarsignings certificate will state the date of the signing and as well as incorporating photo proof of the signing and the company address. Allstarsignings is a Manchester based sports memorabilia company. Established in 2000 we specialise in high quality hand signed autographed items. All items come directly from private signings and supplied with a speedy, reliable service. All of our autographs are individually hand signed by the stars comes with our Certificate of Authenticity incorporating photo proof. Allstarsignings have carried out hundreds of signing sessions with many stars including Pele, Eric Cantona, Kenny Dalglish, Jonny Wilkinson, Thierry Henry, Dennis Bergkamp, Ryan Giggs, George Best, Sugar Ray Leonard, Anthony Joshua and many many more. Huge range of signed products available. Allstarsignings is owned and run by sports fanatics and was born from our own enthusiasm for collecting autographs. All Star Signings, the number one source for signed memorabilia and autographs! All Star Signings is a Manchester based sports memorabilia company. We have carried out private and public autograph signings with many sports stars covering football, boxing, rugby, motorsport and film. The item “FRAMED HARRY GREGG SIGNED MANCHESTER UNITED 1958 GOALKEEPERS SHIRT BUSBY BABE” is in sale since Wednesday, March 13, 2019. This item is in the category “Sports Memorabilia\Football Memorabilia\Autographs (Original)\Signed Shirts\Premiership Players/ Clubs”. The seller is “*allstarsignings*” and is located in Manchester. This item can be shipped to United Kingdom.