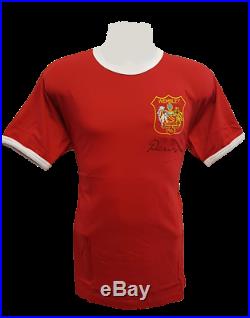 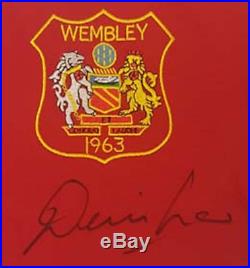 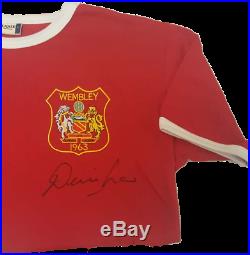 This 1963 FA Cup Final Manchester United replica Shirt is signed on the front by the King of the Stretford End. A Certificate of Authenticity from MUST – the official Manchester United Supporters Trust – is supplied with all our signed shirts. T online shop and also on the matchday stall. T is the official Manchester United Supporters Trust (Google us) – a non-profit fans organisation. Owned and run by our members – passionate Manchester United supporters. Recognised by MUFC, the FA, the PL and national fan organisations (FSF/Supporters Direct) and registered with the Financial Conduct Authority – with offices at 18 Sir Matt Busby Way just a stone’s throw from Old Trafford. All our items can be collected free of charge if preferred (see below). All shirts come with a Certificate of Authenticity. ABOUT DENIS Denis Law is a true Manchester United legend who spent 11 years at Manchester United, where he scored 237 goals in 404 appearances. There are only three players with a statue at Old Trafford – Charlton, Law and Best – but only Denis Law has two! His goals tally places him third in the club’s history, only Wayne Rooney and Sir Bobby Charlton are ahead of him. He was nicknamed The Lawman by supporters, and Denis the Menace by opposing supporters. He is the only Scottish player to have won the Ballon d’Or award, doing so in 1964, and helped United win the First Division in 1965 and 1967. The 1963 FA Cup Final, the 82nd season of England’s premier club football competition, was played at Wembley Stadium (which was fully roofed for the first time) on 25 May 1963 and contested by Manchester United and Leicester City. United won 31, with a goal from Denis Law and two from David Herd, lifting the trophy for the third time. All our items can be collected FREE OF CHARGE from MUST HQ in office hours and for 3 hours before home games. We’re next door to the MUFC stadium at. 18 Sir Matt Busby Way, MANCHESTER M16 0QG. Office hours – please call. To ensure we are open before starting your journey but usual hours are. MONDAY- FRIDAY 10.30AM – 6.15PM. Except THURSDAY 10.30AM – 4.30PM. We have more items and special discount offers available from our website shop – search for “Manchester United Supporters Trust: MUST Online Shop” to find us. The item “Denis Law 1963 FA Cup Final Hand Signed Manchester United Shirt” is in sale since Saturday, October 19, 2019. This item is in the category “Sports Memorabilia\Football Memorabilia\Autographs (Original)\Signed Shirts\Premiership Players/ Clubs”. The seller is “manchesterunitedsupporterstrust_must” and is located in Manchester . This item can be shipped worldwide.