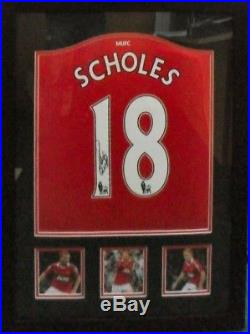 This piece of memorabilia is the iconic No. 18 shirt worn by Reds Legend Paul Scholes and features the signature of the man who surely wears the mantle of the greatest midfielder of his generation. Scholes is undoubtedly the best midfielder of his generation. Paul Scholes would have been one of my first choices for putting together a great team that goes to show how highly I have always rated him. He would have been one of the first players Id have bought, given the chance. Very few players can do that, but Scholes is one of them and I knew he was one of them. Thats why, without question, I think Paul Scholes is the best player in England. Hes got the best skills, the best brain. No one can match him. There isnt a player of his mould anywhere in the world. For years Paul Scholes has been one of the best players in the Premiership. He has always been under-rated throughout his career. Hes a team player, a one and two-touch footballer who makes good decisions on the pitch and makes his team play. He is a very complete, spectacular footballer. He always fights for the ball and tries to lose his marker to help his team-mates either to defend or to have a shot on goal. For any football player in the Premiership, Scholes is a player you want to emulate. I would happily end my career with the medals that Scholes has. Given away by Viera. Posession needlessly surrendered by Arsenal. Happy to get the ball down the other end of the pitch…. But can he do any more than. Is that the goal that’s. Won it for Manchester United? The 10 men have withstood the pressure, they’ve. Saved a penalty, and now Manchester United are withing moments of reaching the FA. Cup Final and that is as good a goal as you can wish to see. This is an unframed official replica Manchester United home shirt signed on the number 18 by Paul Scholes. Item supplied by MUST – the Manchester United Supporters Trust. Visit the MUST Shop here. For loads more top stuff. MUST is the independent Manchester United Supporters’ Trust, a not-for-profit organisation and an Industrial and Provident Society registered with the. Financial Conduct Authority (30024R). Under the name I-MUST Limited with offices at MUST, 18 Sir Matt Busby Way, MANCHESTER M16 0QG Tel: 0161 872 3300. MUST is the independent Manchester United Supporters’ Trust. Formed originally in 1998 (as SUAM) by. (MUST President and Deputy Chairman of Saatchi & Saatchi Worldwide), political journalist Michael Crick (BBC Newsnight), sports journalist Jim White (Daily Telegraph) and a handful of other Manchester United supporter shareholders, the organisation has grown & transformed into MUST in 2005. MUST is a not-for-profit organisation and a member trust of the Government backed Supporters Direct. MUST believes the interests of Manchester United Football Club & its supporters are best served by a partnership between owners & supporters – ultimately leading to supporter ownership of at least 50% + 1 share in the long term. The club & business should continue to be managed by the best professionals but also benefit from the added affinity between the supporter and the club that only comes with supporter ownership. Bayern Munich, Borussia Dortmund or Barcelona, might be seen as examples of our preferred ownership model for Manchester United. Sorry about this but we’ve been forced to adopt this policy by the actions of some users. The item “Paul Scholes #18 Signed Manchester United shirt” is in sale since Tuesday, July 17, 2018. This item is in the category “Sports Memorabilia\Football Memorabilia\Autographs (Original)\Signed Shirts\Premiership Players/ Clubs”. The seller is “manchesterunitedsupporterstrust_must” and is located in Manchester . This item can be shipped worldwide.